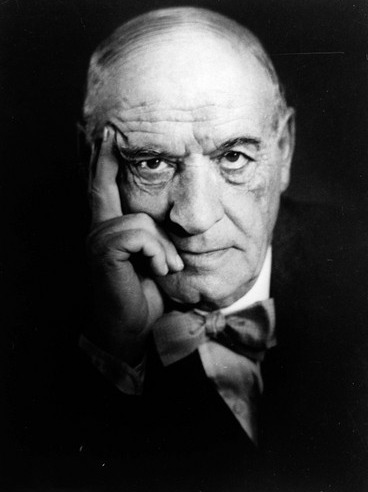 José Ortega y Gasset was a Spanish philosopher and essayist. He was born in a wealthy bourgeois family. His grandfather, Eduardo Gasset y Artime, started the newspaper called “El Imparcial”, which was a very important newspaper in Spain at the time. José Ortega y Gasset’s father was the writer and journalist José Ortega Munilla. My point is that Ortega y Gasset was raised in a very well educated family. I believe that it explains why “España Invertebrada” is such an elitist book.
This book is not my favorite at all, but I recommend it because I think it is crucial to understand his mentality. José Ortega y Gasset had an impressive influence on the intellectual community.
This book attacks local nationalisms or regionalisms based on what he calls “particularism”. This concept is explained as the state of spirit in which the individual believes that he/she doesn’t need anyone else. A nation is for Ortega a community of individuals that support each other. This support becomes humiliating when a nation is infected by “particularism”. Individuals don’t want to receive help from anyone. They want to be a unit and not a collectivity. That is the reason why Spain breaking. But the problem comes from Castile. Castile has been the place where the idea of Spain was born. Spain brought Iberia together because it was a project for the future. But Spain started to break down when Castile stopped thinking on the future, and started living in the past. It is necessary a common project for the future.
In the second half of the book José Ortega y Gasset explains that any society needs two things: a mass of people, and an intellectual elite to rule them. Chaos starts when people don’t want to be ruled by a selected minority. A society without aristocracy is impossible. 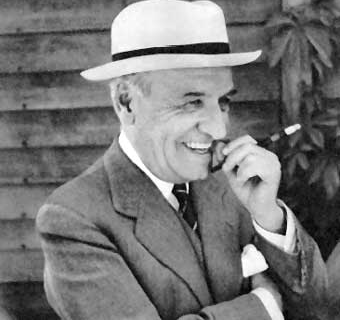 José Ortega y Gasset (1883-1955) has been one of the most influential men in Spain during the first half of the 20th century. He was very successful in writing essays and everyone took him very seriously. There is no question that he was a crucial part in the intellectual Spanish community at the time. Many of us can label him as an intellectual elitist, or point out some of his political preferences, but no one can deny how brilliant he was. He wrote an amazingly large number of essays. Some of them are “Meditaciones del Quijote” (1914), “Vieja y nueva política” (1914), “España invertebrada” (1921), “La deshumanización del arte e ideas sobre la novela” (1925), and “La rebelión de las masas” (1929).


“Vieja y nueva política” is a speech he gave on March 23, 1914. Ortega y Gasset started the “Liga de Educación Política Española”, and on this conference he presented it to the public. He basically explains that there are two Españas:
a.     España oficial: He refers to agencies like the Parliament, political parties, Universities, newspapers, etc. This Spain is stuck in the past, and does not understand present times.
b.     España vital:  He means the new generation (though he narrows it to the intellectual community), the new ideas.

On his speech he invites all intellectual to get together under the “Liga de Educación Política Española” in order to start a new way to do politics. Its target is not to be in power, but stimulate a healthy national vitality (a society that is able to express its desires through politics). He considers that changing our society will change the Government. Political parties are one of the obstacles, because they only care about winning the elections. He also explains that the “Liga de Educación Política Española” doesn’t defend any type of government. They only believe in what is efficient. If a specific type of government is not efficient anymore, it has to be changed. That’s why their loyalty is not to the Monarchy or he Republic. They are only loyal to Spain. But surprise, surprise… Ortega believed that Monarchy was the most efficient type of government for Spain at the time. 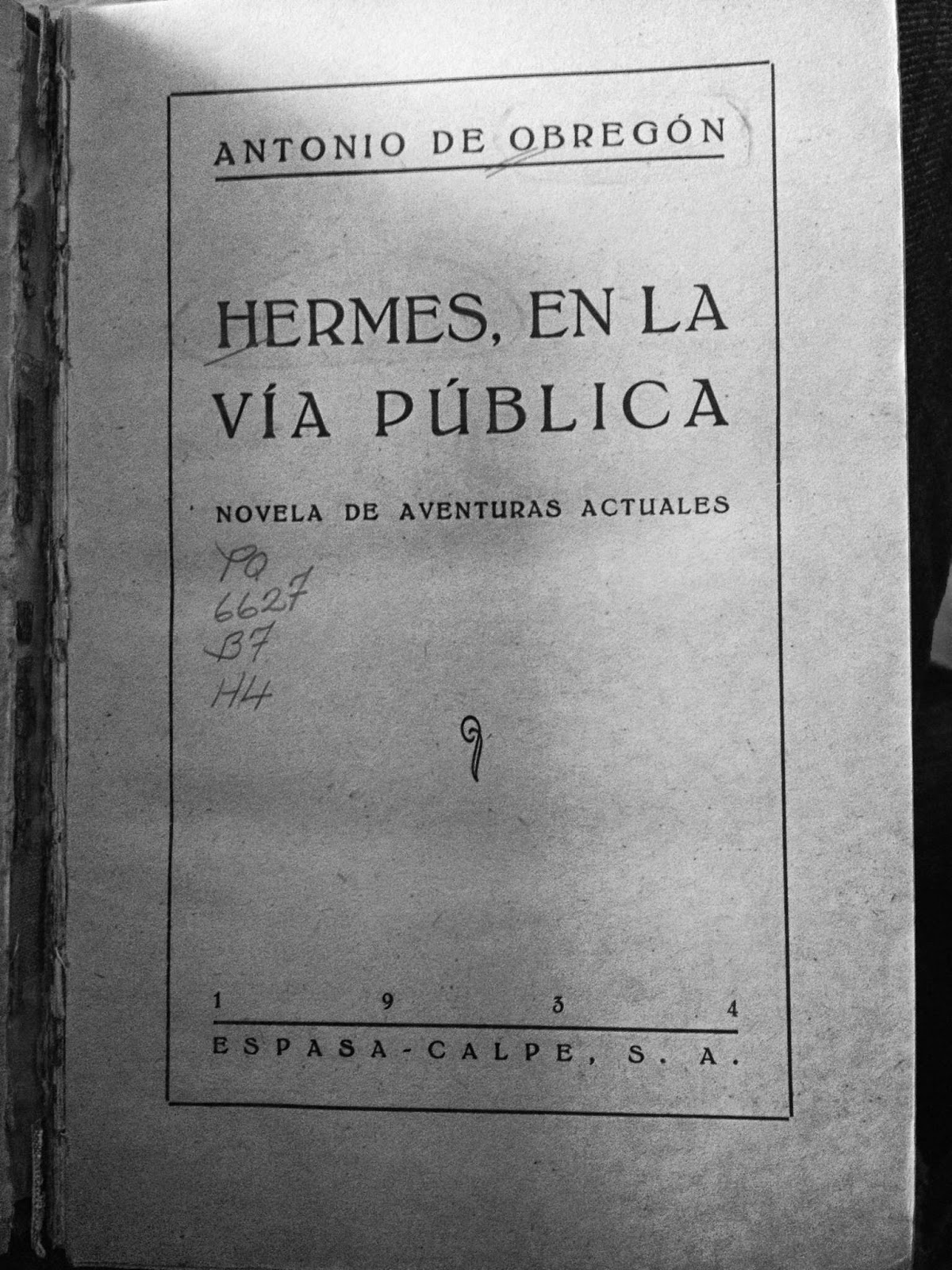 Antonio de Obregón (1910-1985) was a Spanish writer, and also a film director. He wrote two novels
(“Efectos navales”, and “Hermes en la vía pública”), and a poetry book (“El campo, la ciudad y el cielo”). I learned about this author through a great literary critic, Juan Herrero Senés, who is a Spanish literature professor at the University of Colorado at Boulder.

The main character of this novel is Hermes, who fell in love with Blanca. They met in a port area, and spent the rest of the day together. But then she disappeared. Later they met again, and he tricked her into having sex. Blanca was married to René B. W. Dupont, a powerful designer/business man known as the King of Fashion. He faked his death and framed Hermes for his murder. Hermes had to run away to Egypt, and create a new identity. Hermes and René crossed paths again, and at the end René sold Blanca to Hermes.

The plot is very fun and engaging, and it has a twisted sense of humor. It reminds me a little of Gómez de la Serna’s book “El caballero del hongo gris”. In both novels humor is a very important part of the style, and also in both cases the main characters know how to work the system, and are professional swindlers. This book was published in the early thirties, when writers tried to avoid homosexual characters. Homosexuality was a taboo. But that is not the case in this book. “Hermes en la vía públuca” is one of the few books from this time that has a gay character, and actually is the smartest one. I am talking about René B. W. Dupont, the only one able to fool Hermes successfully. Though this character is the villain in the story, or at least the most evil of all, it is fascinating that Antonio de Obregón chose to have a gay character.

Posted by Unknown at 1:38 PM No comments: 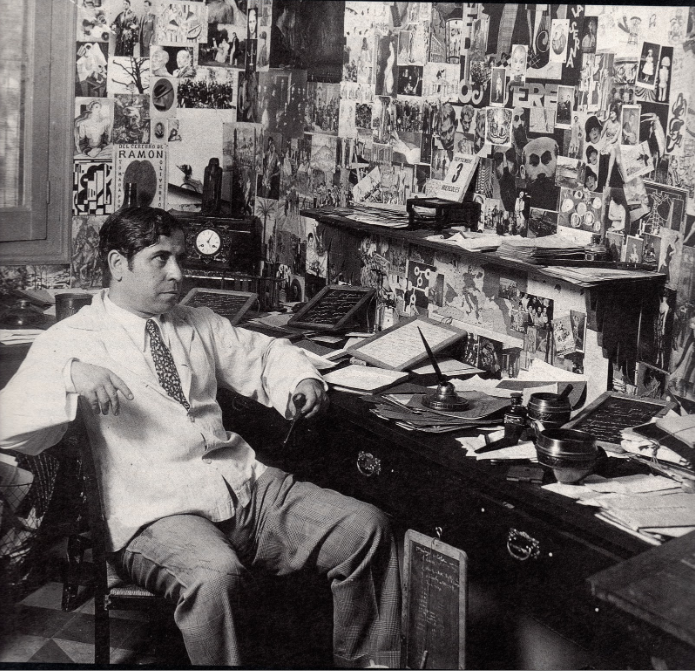 Ramón Gómez de la Serna (1888-1963) was a Spanish writer and a member of the Generation of
1914. His literary production was remarkably extensive, and he is very well known by his “greguerías” (a new genre that he invented).

“Cinelandia” was published in 1923. But, is it a novel? I like to believe so. The book tells the story of the city of Cinelandia, which actually is the main character. This place is a parody of Hollywood, CA. Cinelandia is a fake city created in order to produce movies. It was a huge film factory, to the point that became a real city. Emerson was the president/city major, and he can be considered as the head of the company. All movie stars lived there, and attracted everyone who wanted to become one. Like in Thomas More’s Utopia, the book explains how the city functions, its peculiarities and problems.

This book shows the impact that the film industry had on society during the first half of the 20th century. Hollywood became the heart of the movie industry with four major film companies: Paramount, Warner Bros., RKO, and Columbia. Ramón Gómez de la Serna deeply analyzed this phenomenon, paying special attention to the way this industry was affecting our society. He uses humor and parody to keep the reader entertained, while giving the opportunity to think critically. One question that rises after reading the book is: “Cinelandia” is a reflection of the world, or the other way around? Movies were inspired in reality, but at the same time had a huge influence on the World.

I found this book extremely helpful to understand how the film industry was perceived at the time. Movies were made for the entire World, and that makes Cinelandia a cosmopolitan film factory.
Posted by Unknown at 9:16 AM No comments: 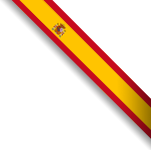